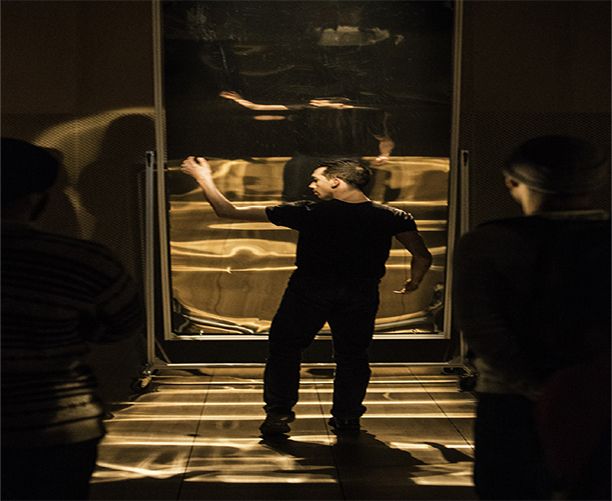 A reversed Witness ; Eclosions – The Flight of Spring ; Lessons in Love and Violence ; Inside your Bones.

I often attend contemporary music concerts with some second thought and, even, some fear. There is this concern that, for the umpteenth time, the mix of styles and genres I will have to listen to will not hold future promises nor open doors to the present because of a lack of awareness of appropriation or filiation. As you can tell, I felt slightly perplexed when I went to the Ars Nova concert presented by the group’s new conductor Jean-Michaël Lavoie at the new Canadian cultural center in Paris, in collaboration with the music department of the Université de Montréal. This was October 12, 2018, only a few days after their inaugural concert in Poitiers. I was, therefore, perplexed, but I was also, as one might later come to understand, ready to be surprised…

Several spaces and works were offered to us by way of an itinerary. On the ground floor, Suspended time (2004) was a first piece by Jean-François Laporte “for a recorded tape and live analog feedback”. The composer activated the feedback directly on a strange electro-acoustic console adorned with a few springs (BOING BOING), the latter of which punctuated and accompanied a recording of trains and various noises in a train station in Montreal. I remember discovering Spirou comic albums as a child with the same curiosity… So: was this just another (electro)-acoustic piece, as anecdotal as many other works? An introductory text by the composer made me realize that the banality of the sounds implied a completely different positioning on the listener’s part: “It consists of an experience; of experiences that are simultaneously ordinary and extraordinary… To abolish our control on the world in order to commune with it fully…”.

This experience is never lived in isolation, even if it is lived alone. It is utterly objectivating precisely because it is essentially intersubjective: if it can actualize in me, it means that it can also

virtually bloom in all of my neighbors, these alter-ego listener-witnesses of the same concert, these suspended train workers, operators without whom nothing extraordinary could occur, managers of a place that is neither in the trains nor in a station, neither in Montreal nor anywhere else but currently in me and maybe in others, and potentially in all of us. This might be said by the hypothetical and never-ending theology of the Verb-Sound that becomes flesh in each of us. It is indeed a strange genesis, a curious communial voyage in a world that is constantly new with instantaneous interconnections, a return with no initial departure, a return which is an ultimate REVERSAL: THIS IS – I AM.

Eclosions – The Flight of Spring

Eclosions, in the plural form, stands for the flight of a generic spring season we wish to be eternal: the title was fitting for what the listener-spectator was about to experience in this new concert by Ars Nova at the Canadian Cultural Center in Paris, on the 22nd of March, in 2019.

The common landscape of Western “formal” music, a vast and fertile cultural ground, led to a multiplicity of paths, some of which were extra-European: Debussy’s discovery of Javanese Gamelans in 1889, the vigorous bloom of jazz, the slow instillation of Far Eastern spirituality in the minds of Westerners. These paths developed thanks to many “laboratories” and other spontaneous cultural initiatives; they changed the relationship musicians held towards their music. This resulted in certain composers – as well as some instrumentalists, actors, and singers – no longer identifying with the divisions of roles that existed between creators and performers, written and improvised music, ancient and contemporary music, songs from elsewhere and voices from here… Even when their education had taught them about these divisions.

Tonight’s concert was at the crossroads of such sidesteps, such bridging passages and outward gazes.

Myriam Boucher is a creator of visual music. She is based in Montreal and has no borders; she works on the organic relationship between sound, music, image, and nature. Her sound video, Nuées, was projected on a screen at the back of the cultural center’s entrance hall. The flight of night birds and the flapping of wings were all supported by the recordings of a baritone saxophone player, Ida Toninato. The entrance hall implies that it is a space in which the audience interacts.  People engaged in conversations as they waited for the concert to begin and they did not necessarily pay much attention to the screen and to the music, despite the work’s prevailing and captivating low frequencies. A different kind of spatial arrangement would have been recommended for the artwork, such as the one used to exhibit the Nymphéas at the Orangerie museum. There could have been multiple screens, many loud speakers, and a silent audience in the center, attentively immersed in the artwork.

LESSONS IN LOVE AND VIOLENCE

At various points in time, authorities viewed the opera as the ideal space for symbolic representations and manifestations, but also as a space to channel and control creative energies. The opera was, therefore, at the center of the esthetic, technological and political issues of its time. Cinema supplanted it in this role for almost a century and the digital world has now taken over. However, the opera stage seems to be finding its place again in the cultural sphere. The other arts are more broadly influenced by the opera than its limited number of performances may imply, as it is, after all, a social network. It is once more becoming a space used to communicate, one which many creators wish to invest and conquer. The abundance and diversity of works created in the last few years attest to this, whether in Europe, in North and South American countries, and even beyond the usual spheres of influence of Western culture.

George Benjamin was born in England in 1960. He was one of Olivier Messiaen’s last students in Paris. His opera music has been performed in some of the best worldwide venues. Lessons in love and violence was created in London in 2018. It was reprised in Lyon, where I saw it in May of 2019. It then travelled to several European capital cities and journeyed as far as Chicago. The composer’s notoriety contributed to this success, as did Written on Skin, his previous opera, which had made a lasting impression; it had been created in 2012 at the Aix en Provence festival and went on to being presented in twenty operas houses all over the world. The great dramaturgical creativity and coherence between the composer and the librettist, Martin Crimp, were further advanced by the director, Katie Mitchell. Such symbioses have not been that rare in the history of contemporary opera. A glacial and very European detachment could be found in the bond between Luc Bondy and Philippe Boesmans (Reigen 1993, Julie 2005). In a completely different style, a few seminal American collaborations should be remembered: Philip Glass and Robert Wilson (Eintein on the Beach, 1976), John Adams and Peter Sellars (Doctor Atomic, 2005, amongst others). The libretto for Lessons in love and violence is based on Edward II (1593), the play by Elizabethan author Christopher Marlowe.

Some moments are distinctive because of the way they summarize and announce what is to come. The evenings of the 6th and 7th of April, 2019, at the TAP in Poitiers, were a vibratory shock that seized the bones from head to toe – from the feet to the head in a first section, and then from a point above the skull cap, all the way down to a few centimeters below the feet. It didn’t only go through the skeleton, but rather coursed through an expanded body, through an envelope that extended beyond the limits of the muscles and of the skin by a few centimeters; it surrounded all asperities and articulations with generous curves:  it was a true diving suit, but without it being weighty or cumbersome; on the contrary, it was light and open. It was suggestive of a more ample breath, and spread the vibratory shock way beyond its sensitive limits.

A vibratory shock was definitely felt: its name is Inside Your Bones. Jean-François Laporte’s work lasted fifty five minutes. It was coproduced by Ars Nova, Totem Contemporain and the Poitiers Théâtre Auditorium. It was created in Montreal in February, 2019.

It is a strange ceremony, a curious procession of physical sensations, all of which are not isolated but rather connected. As roving listeners, we establish a very particular relationship with each other as our sensations spill out so distinctly from our carnal and muscular envelopes. This internal movement, which we all share, stems from the most physical aspect of ourselves. And yet, it links us to a space that is vaster than the room’s immediate environment. Internal movement: this means that the line that crosses each listener from one end to the other triggers in each person an intense emotional response. The listener’s emotions and sensations act as springboards but not as causes; they act as revealers but not as targets.

When we think music, we think movement and we think sound, but it is organized movement and mastered sound. We think energy and pulsation, but also form and continuity. We think expression, but also impression: it is a world in which the outside and the inside interpenetrate in curious ways, such as that which is made to move and that which makes something move, that which deploys and that which retreats. When we think music, we also think body and spirit, but the distinction is hard to maintain due to our thinking habits and how they taught us to see the body as the envelope, and the spirit as animating the body from within. But the rapport between the internal and the external seems, strangely, to flip when it comes to the way we see ourselves when we hear, or play, music. Inside Your Bones, the experience that is induced by the piece, allows us to move towards an awareness of this reversal, one which reestablishes the body and the spirit in a much more fruitful bond, a bond that is less abstract and “more embodied”. What we are speaking of here is a consciousness continuum in which matter and life, body and spirit, are steps. They are intensification thresholds rather than irreducible positions opposed by a difference in nature.

Any musical piece worthy of its name is the product of the composer’s craftsmanship, personal history and intentions. That is, at least, what is stated. But this may not be as accurate now as it was ten years ago, since, nowadays, some musical works seem to be more direct emanations of a vast no-border 1 psychical experiment in which the composer is the organ, the place. If these works manage to awaken in listeners a range of experiences of a similar nature and intensity, they can become the vectors of new and unpredictable explorations. They can be valuable: the listeners of these works can become the co-experimenters of a world in which the works open inside them vertically, breaking away from linear cause-and-effect relationships. This is to be experienced with the eyes of the brain closed, with the eyes of the body open 2.

[1] No-border means that it integrates all phases of the mental life: a same consciousness populates sleeping and waking hours; dreams, hearings, visualizations and premonitions can become perception tools and cognitive agents. This is well reflected in the works and the lives of certain musicians. Phil Glass made references to this many times in his beautiful autobiography Words Without Music, 2015.

[2] This last sentence is a quote by Mère, the partner of Sri Aurobindo. Her experiences and narratives were compiled and commented by Satprem in Le Mental des Cellules, Ed.Robert Laffont, 1981.

Inside Your Bones (Excerpts)